Could we win a trade war?

When President Trump announced he would be placing tariffs on steel and aluminum for national security purposes, there was great dismay among many economists. In terms of protecting manufacturing jobs in the United States, the tariffs would have little effect, as the steel and aluminum industries are largely automated, and employ a relatively small number of workers. In fact, since many other industries use steel and aluminum as inputs, whatever jobs are gained in the metals industry could be completely negated by job losses elsewhere.

Moreover, there is a danger of these tariffs being the initial blow in a larger trade war. Bloomberg economists estimated the potential costs of a larger scale trade war, and found that a full-blown trade war could cost as much as $470 billion by 20201. 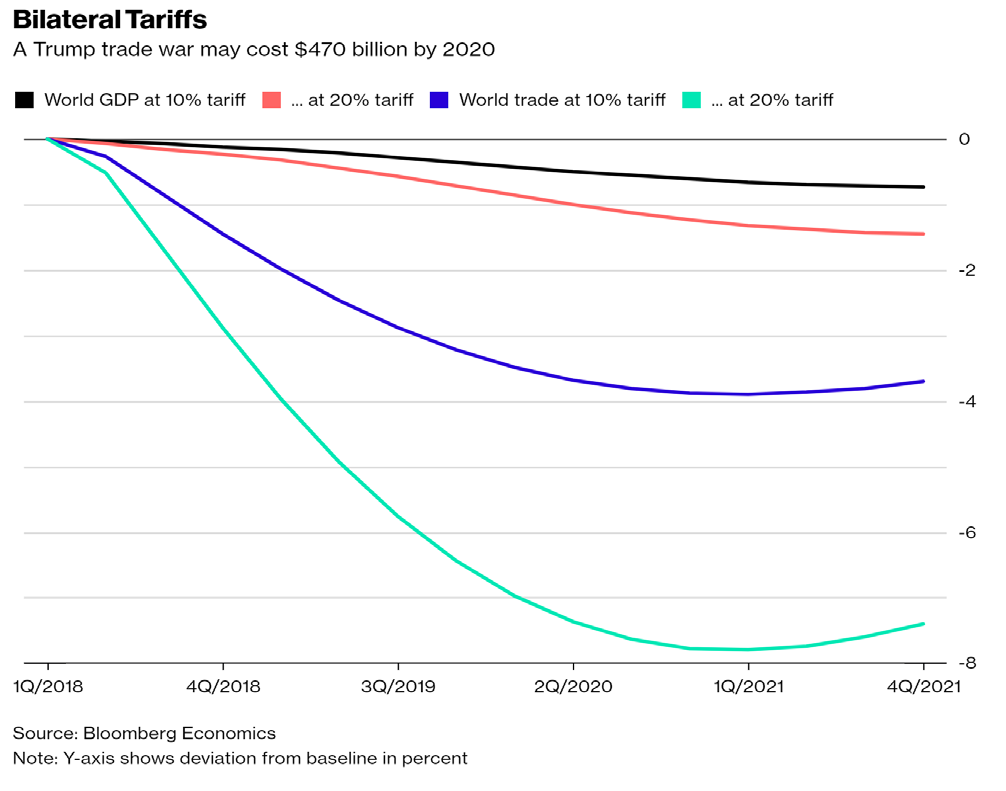 The Penn Wharton Budget Model found similar consequences from a full-blown trade war, as it estimated that a trade war could wipe out any gains from the recent tax cuts over the next ten years, with even greater losses accruing beyond that decade2.

Now these are worst-case scenarios that assume considerable retaliation and tariff escalation worldwide. None of this has come to pass as of yet. In terms of the here and now, Mark Zandi of Moody’s Analytics estimated that the steel and aluminum tariffs would reduce economic growth by only a few hundredths of a percentage point3. Still, given the escalation risks, why take this step when it’s not clear how even a relatively small trade spat is helpful for the United States? In a recent Wall Street Journal survey, economic forecasters estimated that the steel and aluminum tariffs would result in a net loss of 53,000 jobs, with much larger employment losses if other countries retaliated with tariffs of their own against the United States4.

One possible benefit to the tariffs was described by Harvard economist Martin Feldstein5. Feldstein argues that the tariffs are particularly targeted at China. He describes Chinese subsidies of steel as hurting US steel manufacturing (though helping US consumers and businesses that use steel as inputs), but he focuses particularly on Chinese trade policy with respect to intellectual property. Feldstein charges that the Chinese government has been requiring the “voluntary” transfer of technology as a precondition for entry into the vast Chinese market. American firms are understandably dismayed about such circumstances, particularly since the Chinese government can also delay approval in order to buy time for domestic firms to implement its newfound technology. Feldstein believes that, “US negotiators will use the threat of imposing the tariffs on Chinese producers as a way to persuade China’s government to abandon the policy of “voluntary” technology transfers. If that happens, and US firms can do business in China without being compelled to pay such a steep competitive price, the threat of tariffs will have been a very successful tool of trade policy.”

We hope that Feldstein is right about the potential of the US to use its tariffs in a strategic, targeted way. A few days ago that argument looked highly speculative. The tariffs appear to have arisen in an off the cuff manner rather than in a strategic fashion—Trump’s announcement reportedly caught many of his advisors by surprise and was quickly followed by the resignation of National Economic Council head Gary Cohn. However, on Thursday the scope of the steel and aluminum tariffs was narrowed, and now excludes Europe, Canada, and Mexico. Moreover, Trump announced tariffs of an estimated $60 billion on Chinese exports as punishment for the alleged theft and mandated transfers of US technology. As the chart below shows, mobile phones, computers, and telecom account for over 28% of US imports from China, so the impact of mandated technology transfers from US companies to China could be quite large6.

These refocused tariffs, while still worrisome, are nonetheless considerably more strategic than Trump’s initial proposal. Targeted tariffs against specific Chinese practices could yield a settlement that opens up Chinese markets further and enables US firms to compete in Chinese markets while retaining technological advantages. However, it is also possible that retaliation by the Chinese will lead to a larger trade war. Markets are nervously watching the standoff, as the S&P 500 fell 2.52% on Thursday. Trump’s remark that these new tariffs were “the first of many” seems unlikely to provide reassurance.

Still, so far, at least, the impact of the tariffs upon the overall economy is modest, and in the end, a small trade spat would likely generate more light than heat. But most forecasts we’ve seen argue against President Trump’s March 2nd tweet that “When a country (USA) is losing many billions of dollars on trade with virtually every country it does business with, trade wars are good, and easy to win.”7

We hope so. But we’re not convinced it’s that easy.

Disclosure:
This material is not intended as an offer or solicitation for the purchase or sale of any financial instrument or investment strategy. This material has been prepared for informational purposes only, and is not intended to provide, and should not be relied on for, accounting and legal or tax advice. Any forecasts contained herein are for illustrative purposes only and are not to be relied upon as advice or interpreted as a recommendation.