Is Inflation Making a Comeback?

Last year there was a steady stream of articles wondering whatever happened to inflation. Then, in January, one month of 0.5% CPI inflation brought the inflation seers out of the woodwork. Renewed concern about inflation is not wholly without merit; we would agree that inflation concerns played a part in the February turbulence in the US stock market. However, even if the inflation tide is rising, it has a long way to go before it risks becoming a flood. With respect to your portfolio, we believe that inflation is one of many variables to monitor, but is not a major concern at this time. In fact, a modest increase in inflation is likely to spur continued rate normalization, eventually making new bond purchases more profitable for your portfolio.

In a recent article longtime financial writer Robert Samuelson expresses an almost primal fear about reigniting the inflation of the 1970s1. Nobody wants to see double digit inflation, but it is hard to see a mechanism that takes us there. Samuelson cites Fed complacency as a main driver of 1970s stagflation, but that view ignores two major oil embargoes from that decade that did much of the dirty work to cause prices to rise. The US core inflation rate has been below 3% for 20 consecutive years and despite recent increases is still less than 2.5%. There’s just no evidence of an imminent crisis.

Darren Williams, in his commentary for Alliance Bernstein, affirms that inflation has been tame for the major developed economies as well2. In the last 20 years, G7 core inflation has fluctuated between 1 and 2 percent for virtually the entire period. Furthermore, Williams underlines that the Phillips curve, which theorizes that decreases in the employment rate leads to greater inflation (as scarce labor successfully bargains for higher wages), has only a modest impact on inflation. A 5% gap in output—basically the difference between normal growth and a recession—yields only a 0.65% change in inflation.

However, Williams does argue that several structural anti-inflationary factors over the past two decades are likely to reverse in the coming years, so that inflation is prepared to make a comeback.

Demographics have helped suppress inflation as a growing labor force held down wage growth, but the graying of America, as well as the world, means that future demographics are likely to put upward pressure on inflation. As the chart below shows, the US labor force participation rate peaked at over 67% around the year 2000, fell sharply with the Great Recession of 2008-2009, and despite the nine year economic recovery, seems to have bottomed and has held steady at just under 63% for the passed four years3.

Globalization also unleashed a huge supply of cheap labor over the past 20 years, but with so much of the world now integrated, this anti-inflationary factor appears set to dissipate. When combined with the steady economic expansion in the United States over the past decade, it is no surprise that we have finally reached a point in which the number of job seekers equals the number of job openings4: 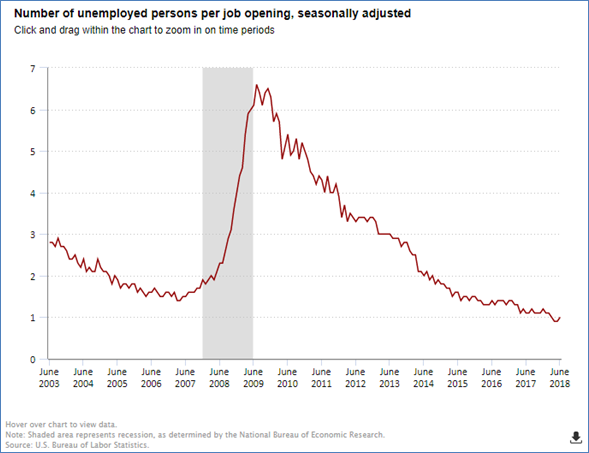 Moving beyond labor market factors, Williams argues that debt overhang caused by low interest rates of the past decade will need to be trimmed; a simple way for governments to decrease debt is to allow some of it to be eroded by inflation.

Williams also predicts that the Fed, no doubt to Samuelson’s horror, will become increasingly tolerant of inflation. But tolerance is relative; central bankers around the world have had a virtually zero-tolerance policy for decades with respect to inflation. If times are changing, as they appear to be, the question comes whether the Fed is willing to allow only a smidgen of inflation, or whether it is increasing its inflation tolerance considerably—perhaps even allowing inflation to approach 4%. Economist Tim Duy suggests that the former is the case5. Duy quotes departing New York Fed President William Dudley: “As long as inflation is relatively low, the Fed is going to be gradual. Now, if inflation were to go above 2 percent by an appreciable margin, then I think the gradual path might have to be altered.”

The Fed is already poised to make 3, or even 4, rate hikes in 2018 to preempt any inflation, even though inflation’s rise still leaves it at less than 2.5%. Given that context, it is difficult to imagine inflation surging to even 3% without prompting further Fed tightening.

Of course, there are contrarian views that express considerable fear about future stagflation. One such article, by Bloomberg View’s Danielle DiMartino Booth, leads with the alarming headline, “Markets Better Prepare for Stagflation.”6 But on further review, Booth provides much more support for stagnation than for inflation. Given the length of the current economic expansion, a recession within the next two years would not be a surprise, and there are certainty data points that are concerning. But her money quote for inflation, in citing economist David Rosenberg, is that there are “50/50 odds of 3 percent core inflation by year end.”

Citing stagflation, a term very much associated with the 1970s, doesn’t provide a fair comparison. As a refresher, the chart above shows core inflation over the past 60 years7. The 1970s was characterized by inflation in the 10-14% range. A rise in core inflation to 3% would likely be a mild overshooting of the Fed’s target of 2%, and not a slippery slope to hyperinflation. Prices and wages may be on the rise, and they certainly bear continued monitoring, but given the Fed’s historical and likely future stance, we see no need to make an inflationary mountain out of a molehill. We’ll continue to watch the inflation rate and scrutinize the Fed’s reaction to it, but we believe the Fed’s continued tightening puts it in position to quickly stamp out any inflationary embers.

This material is not intended as an offer or solicitation for the purchase or sale of any financial instrument or investment strategy. This material has been prepared for informational purposes only, and is not intended to provide, and should not be relied on for, accounting and legal or tax advice. Any forecasts contained herein are for illustrative purposes only and are not to be relied upon as advice or interpreted as a recommendation.