For many of us, Thanksgiving in 2020 was a more subdued affair, as rising caseloads of COVID-19 meant that gatherings and travel were recommended to be on a much smaller scale than we are accustomed. With limited celebrations serving as yet another reminder that 2020 has been a difficult year, we thought it might be interesting to change course a little bit, to look back in time.  Despite our current trials and tribulations, we are living in an era quite different from most in human history.

Thomas Malthus was an 18th century English economist who took a dim view of economic progress. His argument was that an increase in productivity would inevitably be met by a corresponding increase in population.  Meaning both that standards of living would not rise, and that there would always be mass poverty.

Malthus’s theory may seem nonsensical now, but at the time of his writings, the historical record of the previous 600 years largely backed up his assertions. For centuries, the economic prospects of the English people were stuck in a Malthusian trap—slow gains in GDP growth were completely eroded by population growth, so that GDP per capita remained stagnant. 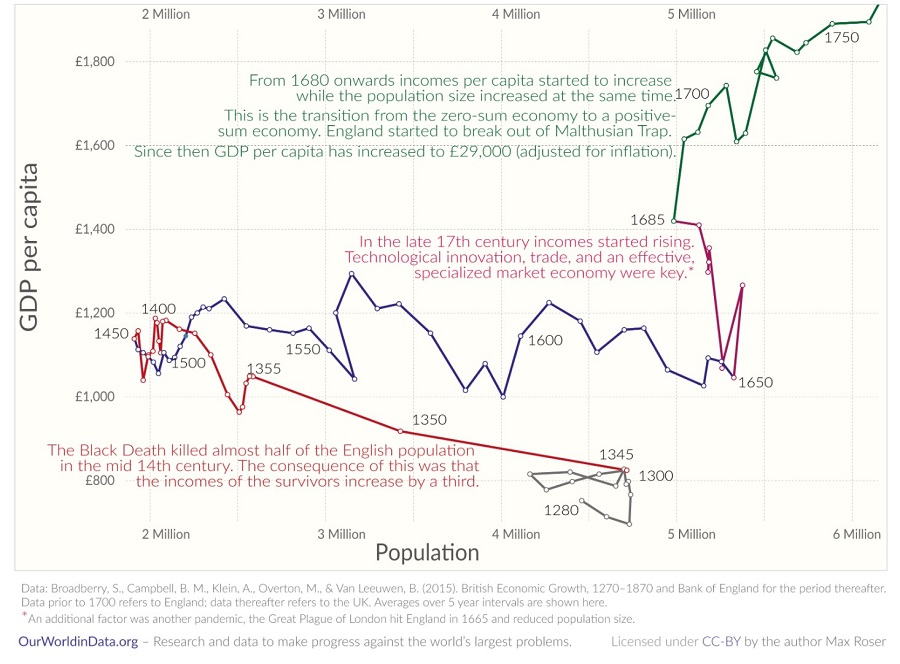 As the timeline in the chart above shows, English GDP per capita was mostly flat for nearly 4 centuries—from 1280 to 1650.  The major increase in GDP per capita, from 1345 and 1355, arose only out of the tragedy of the Black Death – the plague which killed nearly half of the English population – as survivors were able to acquire more fertile lands and leave less productive ones behind. For the next 300 years, slow GDP growth was matched by the growth in population.  It was only in the late 17th century that England was able to start climbing out of the Malthusian trap – as technological innovation, trade, and a maturing, more specialized economy enabled GDP growth to outpace population increases.

The transformation of the English economy, and of the world economy, over the past 300 years has been remarkable, to say the least. We’re no longer in a zero-sum, Game of Thrones style economy, in which one person’s death means more resources for those who remain. As discussed more deeply at https://ourworldindata.org/breaking-the-malthusian-trap, we are now in a positive-sum, collaborative economy.  The scientific breakthrough of COVID-19 vaccines represent not only a humanitarian triumph, but an economic one as well—and for this change in the world we are truly thankful.

This material is not intended as an offer or solicitation for the purchase or sale of any financial instrument or investment strategy. Pfizer (PFE) is owned in some JMS client portfolios.  This material has been prepared for informational purposes only, and is not intended to be or interpreted as a recommendation.  Any forecasts contained herein are for illustrative purposes only and are not to be relied upon as advice.