This Economy is as Clear as Mud

With markets on a record bull run and the US economy at over 10 years without a recession, it is not surprising that pessimists are reading various economic tea leaves as pronouncing an impending recession. In our polarized political age, it is equally unsurprising that the President and his supporters are touting strong economic statistics to counter negative facets of the economy decried by his opponents. Who’s right? Who knows? Right now, this is a smorgasbord economy, with support for every pundit’s view. But since interest in recessions is rapidly picking up steam, as illustrated below, we thought we’d give our take on our current economic pulse1. 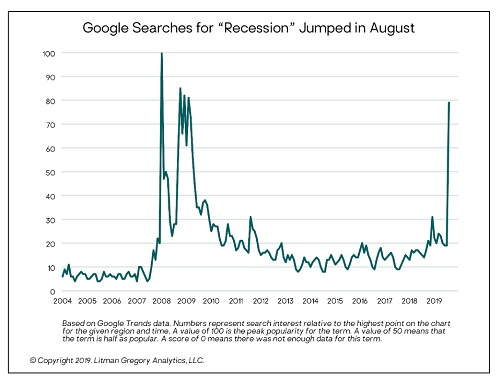 Rather than make some dubious predictions, we are going to lay out several positive and several negative factors with respect to the economy. Positive indicators for the economy are:

However, there are several negative signs for the economy as well.

So even though recession was the new buzzword of August, the signals emanating from the economy are decidedly mixed. We are at higher risk of recession than we have been for some years, but that risk is still moderate at this point. However, given the length of the bull market, lack of overly compelling valuations, and heightened political risks, we believe it is prudent to begin scaling back risk within most portfolios.

This material is not intended as an offer or solicitation for the purchase or sale of any financial instrument or investment strategy. This material has been prepared for informational purposes only, and is not intended to provide, and should not be relied on for, accounting, legal or tax advice. Any references to future returns are not promises ‐ or even estimates ‐ of actual returns a client portfolio may achieve. Any forecasts contained herein are for illustrative purposes only and are not to be relied upon as advice or interpreted as a recommendation for a specific investment. Past performance is not  a guarantee of future results.