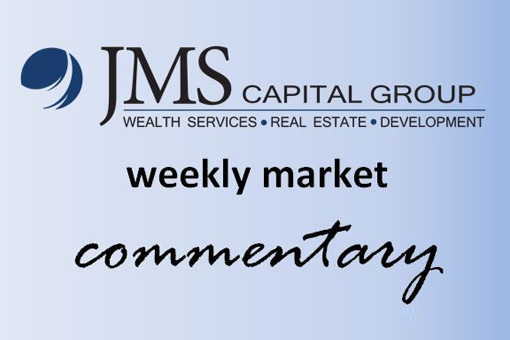 Have you ever watched a lake in a thunderstorm? Heavy rain pummels the surface. Dark clouds drop the sky closer to the water. Gusty winds crash waves ashore. Up top, on land, damage may occur. Underneath, in the deeper water, things often remain pretty much the same.

Last week’s stock market volatility was like a thunderstorm on a lake. Markets were doing well until the squall brewed up on Friday. Ben Levisohn of Barron’s described it like this:

“The fun started on Friday morning, when China announced new tariffs on $75 billion of U.S. goods and a resumption of penalties on U.S. cars. Surprisingly, the market handled it pretty well. U.S. futures markets dipped into the red, but only a bit, and the market appeared ready to shrug off the news, particularly after [Federal Reserve Chair] Powell stuck to his message: The Fed will ‘act as appropriate to sustain the expansion’…That wasn’t enough for the president…he turned his wrath on China and ‘ordered’ U.S. companies to ‘immediately start looking for an alternative to China.’ Now that’s escalation – even if it’s unclear whether the president can legally do that.”

Unsettled, stock markets seethed and stormed. By the end of the day, major U.S. stock indices were lower, and that’s how they finished the week.

The U.S. economy, which is the deep water under the U.S. stock market, continued along as usual. On Friday,

The Economist reported, “…economic data do not suggest that America is sliding into recession. Although inflation remains low and manufacturing activity is weakening, consumers keep spending and there is little sign that unemployment is about to rise.”

The economy isn’t moving fast, but it’s moving steady. Stock markets, on the other hand, are suffering the storms of investor sentiment and anxiety.

S&P 500, Dow Hones Global ex-US, Gold, Bloomberg Commodity Index returns exclude renvested dividends (gold does not pay a dividend) and the three-, five-, and 10-year returns are annualized; and the 10-year Treasury Note is simply the yield at the close of the day on each of the historical time periods.
Sources: Yahoo! Finance, MarketWatch, djindexes.com, London Bullion Market Association.
Past performance is no guarantee of future results. Indices are unmanaged and cannot be invested into directly. N/A means not applicable.

You’ve probably been hearing and reading a lot about Woodstock, the iconic 1969 music festival.

Woodstock made Rolling Stone’s 2004 list of 50 Moments That Changed Rock and Roll, along with the evolution of Chess Records, the death of John Lennon, and the invention of the iPod.

Since 1969, music festivals have become a staple of summertime entertainment. Planet Money reported about 100 events will have been scheduled in the United States this year. Most will have production standards far superior to those at Woodstock. They also cost a lot more. If festival ticket prices increased with inflation, they would cost about five times what they did in the late 70s, reported The Economist. Instead, tickets cost about 50 times more.

Attendees are getting a lot more for their money, though. A festival organizer in Britain said arranging a music festival is akin to setting up a small town with scaffolding and a crew to build it. Festival goers need water, food, drinks, Wi-Fi, security, and bathrooms.  Oh…and music! The economics of the music industry have changed dramatically. At one time, performers made most of their money selling records and would tour to promote newly released songs. Today, artists make most of their money going on tour and new releases are a way to attract fans to a show. Today, succeeding in the music industry is all about making the fan experience worth the price.

“We feared that the music which had given us sustenance was in danger of spiritual starvation. We feared it losing its sense of purpose, we feared it falling into fattened hands, we feared it floundering in a mire of spectacle, finance, and vapid technical complexity. We would call forth in our minds the image of Paul Revere, riding through the American night, petitioning the people to wake up, to take up arms. We, too, would take up arms, the arms of our generation, the electric guitar and the microphone.” --Patti Smith, Singer and songwriter

Certain material in this work is proprietary to and copyrighted by Carson Coaching and is used by JMS Capital Group Wealth Services LLC with permission. | Government bonds and Treasury Bills are guaranteed by the U.S. government as to the timely payment of principal and interest and, if held to maturity, offer a fixed rate of return and fixed principal value. However, the value of fund shares is not guaranteed and will fluctuate. | Corporate bonds are considered higher risk than government bonds but normally offer a higher yield and are subject to market, interest rate and credit risk as well as additional risks based on the quality of issuer coupon rate, price, yield, maturity, and redemption features.| The Standard & Poor's 500 (S&P 500) is an unmanaged group of securities considered to be representative of the stock market in general. You cannot invest directly in this index.| All indexes referenced are unmanaged. Unmanaged index returns do not reflect fees, expenses, or sales charges. Index performance is not indicative of the performance of any investment.| The Dow Jones Global ex-U.S. Index covers approximately 95% of the market capitalization of the 45 developed and emerging countries included in the Index. |  The 10-year Treasury Note represents debt owed by the United States Treasury to the public. Since the U.S. Government is seen as a risk-free borrower, investors use the 10-year Treasury Note as a benchmark for the long-term bond market.|  Gold represents the afternoon gold price as reported by the London Bullion Market Association. The gold price is set twice daily by the London Gold Fixing Company at 10:30 and 15:00 and is expressed in U.S. dollars per fine troy ounce.|  The Bloomberg Commodity Index is designed to be a highly liquid and diversified benchmark for the commodity futures market. The Index is composed of futures contracts on 19 physical commodities and was launched on July 14, 1998. |  The Dow Jones Industrial Average (DJIA), commonly known as “The Dow,” is an index representing 30 stock of companies maintained and reviewed by the editors of The Wall Street Journal.|  The NASDAQ Composite is an unmanaged index of securities traded on the NASDAQ system.|  International investing involves special risks such as currency fluctuation and political instability and may not be suitable for all investors. These risks are often heightened for investments in emerging markets.|  Yahoo! Finance is the source for any reference to the performance of an index between two specific periods.| Opinions expressed are subject to change without notice and are not intended as investment advice or to predict future performance.|  Economic forecasts set forth may not develop as predicted and there can be no guarantee that strategies promoted will be successful.|  Past performance does not guarantee future results. Investing involves risk, including loss of principal.|  You cannot invest directly in an index.| Stock investing involves risk including loss of principal.|  The foregoing information has been obtained from sources considered to be reliable, but we do not guarantee it is accurate or complete.|  There is no guarantee a diversified portfolio will enhance overall returns or outperform a non-diversified portfolio. Diversification does not protect against market risk.|  Asset allocation does not ensure a profit or protect against a loss.|  Consult your financial professional before making any investment decision.