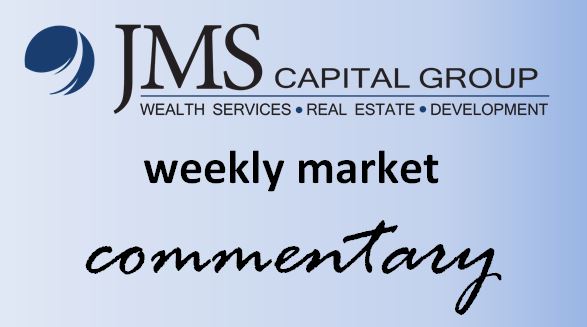 The Federal Open Market Committee completed what it called ‘a mid-cycle adjustment’ with a quarter-point rate cut last week. Some investors were unhappy when Fed officials implied there would not be another reduction this year. They’d been hoping for at least one, reported Barron’s.

Despite the disappointment, investors settled and U.S. stock markets rallied on Thursday.

Then, like a movie villain that just won’t die, U.S. import taxes – a.k.a. tariffs – reared their ugly heads and wiped out the week’s gains.

Barron’s explained: “By midday on Thursday, the stock market had all but recouped its losses in the wake of the Federal Reserve’s policy meeting the previous day. That’s when President Donald Trump announced that he will impose a 10 percent levy on an additional $300 billion of Chinese goods on September 1. The shock sent stocks underwater and resulted in this year’s worst week for the S&P 500 index and the Nasdaq Composite, which slid 3.1 percent and 3.92 percent, respectively. The Dow got off with just a 2.6 percent nick. For the broad U.S. stock market, the paper loss was about $1.1 trillion, according to Wilshire Associates.”

Tariffs have pummeled U.S. and Chinese economies for months. Early estimates suggest imports from China to the United States fell by 12.6 percent from June 2018 to June 2019, while exports from the United States to China fell by 16.8 percent during the same period, according to a source cited by Barron’s.

Bond investors were jolted by the tariff announcement, too. The yield on 10-year U.S. Treasury notes dropped from 2.1 percent last week to 1.9 percent, reported MarketWatch. In Germany, all maturities of government bonds are offering negative yields.

In the face-off between rate cuts and tariffs, tariffs may prove to have a greater impact.

DOES FLYING TRIGGER YOUR LIZARD BRAIN?

Flight attendants and frequent fliers have some crazy stories to tell. Lets Fly Cheaper, Business Insider, and Point Me To The Plane reported on some of the strange things flight attendants have experienced, including:

• Medicated sleep zombies. Passengers sometimes take sleep aids to slumber while flying. In one instance, a passenger sleep-streaked to first class.
• Emotional support animals (ESAs). In an effort to remain calm while flying, some people bring pets for emotional support. These have included a turkey, a pig, a monkey and a kangaroo.
• Impatient passengers. In 2014, a passenger deployed the emergency slide because he wanted to disembark more quickly.
• Strange requests. Flight attendants report passengers have asked how to roll down plane windows, if they could stop at the Sky Mall, and whether they could borrow a screwdriver to take a seat apart.

A flight attendant told NPR, “When people get on a plane, they revert to a lizard brain where they forget all social decencies and common sense…Flying takes away everybody's sense of control. So people tend to grasp at whatever kind of control they can have…”

There may be a scientific explanation for passengers’ odd plane behavior. NPR reported that low air pressure reduces the oxygen in passengers’ blood, making them more emotional and more prone to poor decision-making.

“The lizard brain is not merely a concept. It's real, and it's living on the top of your spine, fighting for your survival. But, of course, survival and success are not the same thing.” --Seth Godin, American author

Certain material in this work is proprietary to and copyrighted by Carson Coaching and is used by JMS Capital Group Wealth Services LLC with permission.  |  Government bonds and Treasury Bills are guaranteed by the U.S. government as to the timely payment of principal and interest and, if held to maturity, offer a fixed rate of return and fixed principal value. However, the value of fund shares is not guaranteed and will fluctuate. | Corporate bonds are considered higher risk than government bonds but normally offer a higher yield and are subject to market, interest rate and credit risk as well as additional risks based on the quality of issuer coupon rate, price, yield, maturity, and redemption features.| The Standard & Poor's 500 (S&P 500) is an unmanaged group of securities considered to be representative of the stock market in general. You cannot invest directly in this index.|  All indexes referenced are unmanaged. Unmanaged index returns do not reflect fees, expenses, or sales charges. Index performance is not indicative of the performance of any investment.|  The Dow Jones Global ex-U.S. Index covers approximately 95% of the market capitalization of the 45 developed and emerging countries included in the Index. |  The 10-year Treasury Note represents debt owed by the United States Treasury to the public. Since the U.S. Government is seen as a risk-free borrower, investors use the 10-year Treasury Note as a benchmark for the long-term bond market.|  Gold represents the afternoon gold price as reported by the London Bullion Market Association. The gold price is set twice daily by the London Gold Fixing Company at 10:30 and 15:00 and is expressed in U.S. dollars per fine troy ounce.|  The Bloomberg Commodity Index is designed to be a highly liquid and diversified benchmark for the commodity futures market. The Index is composed of futures contracts on 19 physical commodities and was launched on July 14, 1998. |  The Dow Jones Industrial Average (DJIA), commonly known as “The Dow,” is an index representing 30 stock of companies maintained and reviewed by the editors of The Wall Street Journal.|  The NASDAQ Composite is an unmanaged index of securities traded on the NASDAQ system.|  International investing involves special risks such as currency fluctuation and political instability and may not be suitable for all investors. These risks are often heightened for investments in emerging markets.|  Yahoo! Finance is the source for any reference to the performance of an index between two specific periods.| Opinions expressed are subject to change without notice and are not intended as investment advice or to predict future performance.|  Economic forecasts set forth may not develop as predicted and there can be no guarantee that strategies promoted will be successful.|  Past performance does not guarantee future results. Investing involves risk, including loss of principal.|  You cannot invest directly in an index.| Stock investing involves risk including loss of principal.|  The foregoing information has been obtained from sources considered to be reliable, but we do not guarantee it is accurate or complete.|  There is no guarantee a diversified portfolio will enhance overall returns or outperform a non-diversified portfolio. Diversification does not protect against market risk.|  Asset allocation does not ensure a profit or protect against a loss.|  Consult your financial professional before making any investment decision.