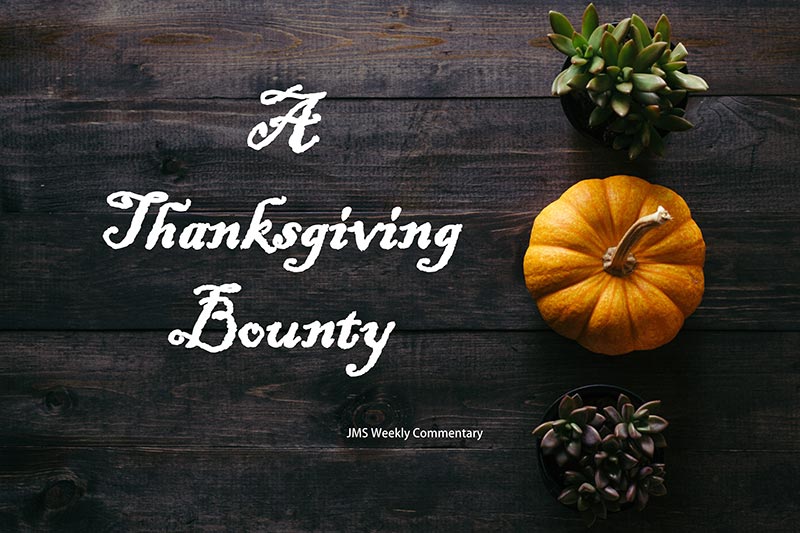 Happy Thanksgiving! We’re so thankful for you.

On Thursday, U.S. investors may find themselves giving thanks for the bull market.

Year-to-date, the Standard & Poor’s 500 Index, Dow Jones Industrial Average, and Nasdaq Composite have all gained more than 20 percent with dividends reinvested. The MSCI World Index also is up 20 percent year-to-date.

Bond markets have rallied, too. U.S. government bond yields have dropped since January, and prices have risen. Not all asset classes have packed an oomph, but investors are feeling optimistic, reported Michael Mackenzie of the Financial Times.

Ben Levisohn of Barron’s expressed some skepticism about the current level of optimism.

“If you believe the current narrative, everything is right with the world. By cutting interest rates three times, the Federal Reserve has averted a recession. And with the U.S. and China slowly making progress on a trade deal, capital spending could revive and boost the economy. And right on time, the S&P 500 index hit a new all-time high, seemingly confirming this rosy narrative…  Strangely, market sentiment appears to be getting better even as the economic data appear to be getting worse.”

He’s not wrong. Economic data suggest U.S. and Chinese economies have begun to experience negative effects related to the two-year-old trade war. Reuters reported economic growth in China has slowed to a 30-year low. Growth in the United States has slowed, too.

While many remain optimistic about progress in resolving the U.S.-China trade dispute, Barron’s Nicholas Jasinski spoke with the chief investment officer of an international wealth management firm, who commented, “Our view of U.S. and China is that it’s a competition that’s going to go on for a generation economically, diplomatically, militarily.”

S&P 500, Dow Jones Global ex-US, Gold, Bloomberg Commodity Index returns exclude reinvested dividends (gold does not pay a dividend) and the three-, five-, and 10-year returns are annualized; and the 10-year Treasury Note is simply the yield at the close of the day on each of the historical time periods. Sources: Yahoo! Finance, MarketWatch, djindexes.com, London Bullion Market Association.

WHY DO PRESIDENTS PARDON TURKEYS?

A turkey may not be on the Great Seal of the United States, as Ben Franklin would have preferred, but the bird has a surprisingly robust history at the White House.

From the 1870s until 1913, turkeys were provided to the White House for holiday meals primarily by Rhode Island poultry producer Horace Vose. After his death, it was a free for all. The White House Historical Association wrote,

“By 1914, the opportunity to give a turkey to a President was open to everyone, and poultry gifts were frequently touched with patriotism, partisanship, and glee. In 1921, an American Legion post furnished bunting for the crate of a gobbler en route from Mississippi to Washington, while a Harding Girls Club in Chicago outfitted a turkey as a flying ace, complete with goggles. First Lady Grace Coolidge accepted a turkey from a Vermont Girl Scout in 1925. The turkey gifts had become established as a national symbol of good cheer.”

The first time a turkey was granted clemency was in 1863. President Abraham Lincoln instructed the White House staff to spare a bird which had become a favorite of his son, reported the Constitution Daily.

Some say President Truman pardoned a turkey or two, but the Truman Library does not agree.

Records indicate it was 1963 before another President spared a turkey destined for the White House kitchen. While both President Lincoln and President John F. Kennedy showed mercy, neither officially pardoned their birds. President Ronald Reagan joked about a pardon, but the first official Presidential turkey pardon was issued by President George H.W. Bush in 1989.

So, why do Presidents pardon turkeys? We’re not really sure. We know where pardoned turkeys go, though.

For many years, like Super-Bowl-winning quarterbacks, they went to amusement parks in Florida and California. The turkeys helped lead Thanksgiving Day Parades. More recently, “…the spared turkeys are sent to an enclosure at Virginia Tech called ‘Gobbler’s Rest’… where they get to frolic with other free turkeys,” reported The Independent.

“You may have heard of Black Friday and Cyber Monday. There's another day you might want to know about: Giving Tuesday. The idea is pretty straightforward. On the Tuesday after Thanksgiving, shoppers take a break from their gift-buying and donate what they can to charity.”
-- Bill Gates, Business magnate and philanthropist

Certain material in this work is proprietary to and copyrighted by Carson Coaching and is used by JMS Capital Group Wealth Services LLC with permission. | Government bonds and Treasury Bills are guaranteed by the U.S. government as to the timely payment of principal and interest and, if held to maturity, offer a fixed rate of return and fixed principal value. However, the value of fund shares is not guaranteed and will fluctuate. | Corporate bonds are considered higher risk than government bonds but normally offer a higher yield and are subject to market, interest rate and credit risk as well as additional risks based on the quality of issuer coupon rate, price, yield, maturity, and redemption features.| The Standard & Poor's 500 (S&P 500) is an unmanaged group of securities considered to be representative of the stock market in general. You cannot invest directly in this index.| All indexes referenced are unmanaged. Unmanaged index returns do not reflect fees, expenses, or sales charges. Index performance is not indicative of the performance of any investment.| The Dow Jones Global ex-U.S. Index covers approximately 95% of the market capitalization of the 45 developed and emerging countries included in the Index. |  The 10-year Treasury Note represents debt owed by the United States Treasury to the public. Since the U.S. Government is seen as a risk-free borrower, investors use the 10-year Treasury Note as a benchmark for the long-term bond market.|  Gold represents the afternoon gold price as reported by the London Bullion Market Association. The gold price is set twice daily by the London Gold Fixing Company at 10:30 and 15:00 and is expressed in U.S. dollars per fine troy ounce.|  The Bloomberg Commodity Index is designed to be a highly liquid and diversified benchmark for the commodity futures market. The Index is composed of futures contracts on 19 physical commodities and was launched on July 14, 1998. |  The Dow Jones Industrial Average (DJIA), commonly known as “The Dow,” is an index representing 30 stock of companies maintained and reviewed by the editors of The Wall Street Journal.|  The NASDAQ Composite is an unmanaged index of securities traded on the NASDAQ system.|  International investing involves special risks such as currency fluctuation and political instability and may not be suitable for all investors. These risks are often heightened for investments in emerging markets.|  Yahoo! Finance is the source for any reference to the performance of an index between two specific periods.| Opinions expressed are subject to change without notice and are not intended as investment advice or to predict future performance.|  Economic forecasts set forth may not develop as predicted and there can be no guarantee that strategies promoted will be successful.|  Past performance does not guarantee future results. Investing involves risk, including loss of principal.|  You cannot invest directly in an index.| Stock investing involves risk including loss of principal.|  The foregoing information has been obtained from sources considered to be reliable, but we do not guarantee it is accurate or complete.|  There is no guarantee a diversified portfolio will enhance overall returns or outperform a non-diversified portfolio. Diversification does not protect against market risk.|  Asset allocation does not ensure a profit or protect against a loss.|  Consult your financial professional before making any investment decision.