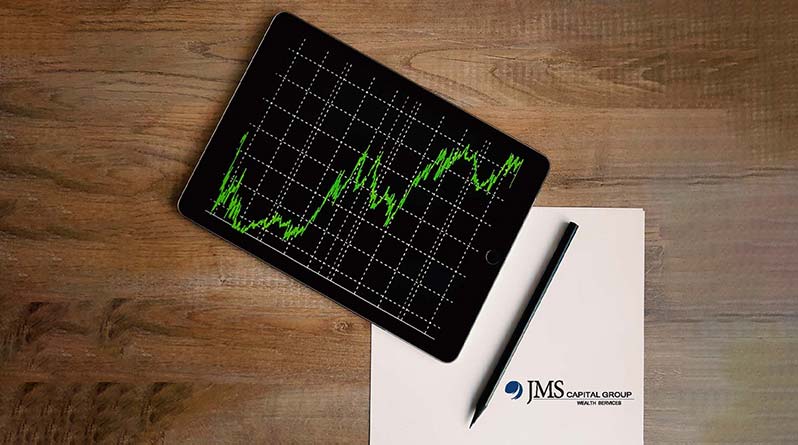 The first half of 2019 saw robust gains across most asset classes, but it certainly wasn’t a smooth ride. Global stock markets got a jump start on the year thanks to progress in US‐China trade negotiations and a newly “patient” Fed, but an abrupt breakdown in the trade talks (announced via Presidential tweet) spurred a sharp market sell‐off in May. Stock markets subsequently shook off their swoon in June, rebounding on expectations of Fed rate cuts later in the year and very tentative signs of re‐engagement on the US‐China trade front.

Foreign stocks also notched double‐digit gains through the first half of the year. Developed international stocks gained 5.9% in June, 3.2% for the second quarter, and 14.2% for the year to date. European stocks have done a bit better, gaining 15.6% on the year so far. In April, the “Brexit can” was kicked down the road at least until October 31, but the risk of a disruptive “no‐deal” exit remains. Emerging‐market stocks also rebounded in June, gaining 5.4%. Although emerging‐market stocks were only up 0.8% for the second quarter, their first‐half gains stand at 12.6%. Foreign stocks have suffered the most from the continued negative trade news.

Moving on to the fixed‐income markets, the 10‐year Treasury yield continued to plunge from its multi‐year high of 3.2% last October, dipping below 2% following the Federal Reserve’s June meeting. This was a near three‐year low, and among its lowest levels ever. The 10‐year yield ended the month at 2.0%. Bond prices rise as yields fall, driving the core bond index to a 3.0% gain for the quarter and an impressive 6.1% return so far this year. Floatingrate loans gained 1.7% for the quarter and are up 5.7% for the year.

Looking ahead, we still see a high degree of uncertainty and a wide range of plausible outcomes looking out over the next 12 months (and beyond). But at the margin we think the macro risks have increased. Trade uncertainty has damaged global business confidence in what by many measures is an already weak global economy. While this is for now being offset by easier monetary conditions, the inevitable impact of any additional central bank rate easing is certainly muted.

We believe our portfolios are positioned to both generate attractive returns over the next five to 10 years, and to be resilient across this wide range of potential shorter‐term risk scenarios. If central banks are successful with their renewed stimulus efforts, our analysis indicates that will favor our positions in global equities, flexible income funds, and bond funds with flexible mandates.

On the other hand, should markets turn south, our portfolios will benefit from our “ballast” positions in core bonds, lower‐risk hybrid and alternative strategies, and trend‐following managed futures. These lower‐risk, “insurance” positions have been a drag on our returns over the past several years as U.S. stocks have been in a record‐long raging bull market. But we’ve seen their benefits during the occasional market corrections, including in last year’s fourth quarter. They also present us with potential capital to re‐allocate back into U.S. stocks at lower prices and much higher expected returns if and when the opportunity should arise.

In our year‐end 2018 commentary, we emphasized the wide range of plausible macroeconomic scenarios and financial market outcomes for the year ahead with the potential for either a positive or negative shorter‐term path. Through the first half of 2019 we’ve gotten a little bit of everything—signs of both scenarios, though so far the ups have outpaced the downs.

The first half of 2019 saw robust gains across nearly every asset class—including both core bonds and equities— but it certainly wasn’t a smooth ride. Among the primary drivers of the market sell‐offs and their subsequent rebounds were on‐again/off‐again U.S.‐China trade negotiations and two major shifts in central bank policy. 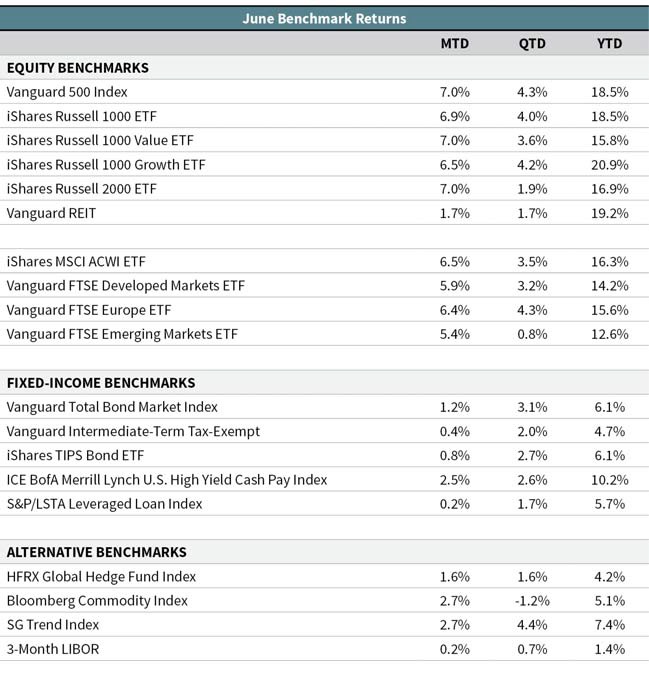 Large‐cap U.S. stocks gained 4.3% for the second quarter, and a remarkable 18.5% for the first six months of the year— largely earning back what was lost in the fourth quarter of  2018. Developed international stocks also experienced a healthy rebound from 2018’s losses, up 3.2% for the second quarter, and 14.2% for the year to date. In April, the “Brexit can” was kicked down the road at least until October 31, but the risk of a disruptive “no‐deal” exit remains.

Emerging‐market stocks, up just 0.8% for the second quarter, absorbed more of the uncertainty surrounding global trade tensions. But for the year so far, they have gained 12.6%.

In fixed‐income markets, the 10‐ year Treasury yield dipped below 2% following the Federal Reserve’s June meeting. This was a near three‐year low, and among its lowest levels ever, reflecting promises of further easing later this year. These falling yields drove the core bond index to a 3.1% gain for the quarter and an impressive 6.1% return so far this year. Floating‐rate loans gained 1.7% for the quarter and are up 5.7% for the year.

Not surprisingly, we still see a high degree of uncertainty and a wide range of plausible outcomes looking out over the next 12 months (and beyond). But at the margin we think the macro risks have increased. Trade uncertainty has damaged global business confidence in what by many measures is an already weak global economy. While this is for now being offset by easier monetary conditions, the inevitable impact of any additional central bank rate easing is certainly muted and the impact of various trade policies will continue to flow through economies around the world.

The risk of a geopolitical shock on financial markets is also ever‐present. Most recently, there is heightened potential for a military conflict with Iran. But there are many other potential geopolitical flashpoints and unknowns: Brexit remains unresolved. The tug of war between democracy, populism, nationalism, and autocracy continues around the globe. The U.S. presidential election next year will likely create additional market uncertainty. China’s rise and challenge of the United States as a global superpower goes well beyond just the current trade conflict. The Middle East (beyond Iran) remains a potential flashpoint, as does North Korea.

To what extent stock markets are already pricing in these fears and risks is also an unknown. On the heels of yet another strong quarter for U.S. stocks, their valuations are looking more stretched than ever. Our analysis of U.S. stock market valuations and expected returns implies the market consensus is discounting an overly optimistic outlook. And it can certainly be said that any investors chasing stocks higher simply because of the tailwind of more monetary stimulus face potential dangers. Our analysis—informed by history and applying forward‐looking judgment—leads us to a base‐case scenario where the expected annualized return from U.S. stocks over the next 5 to 10 years is in the low to mid single digits. As such, we remain somewhat underweight to U.S. stocks across our portfolios until the risk/reward trade‐off improves.

On the other hand, we continue to have one quarter to one third of our equity exposure in foreign stocks. Our analysis indicates their valuations are very attractive relative to the U.S. In our assessment, these markets are implicitly discounting a lot of bad macro news and poor sustained corporate earnings growth. Our base case generates high single‐digit expected returns for developed international and emerging‐market stocks over the medium‐term horizon. 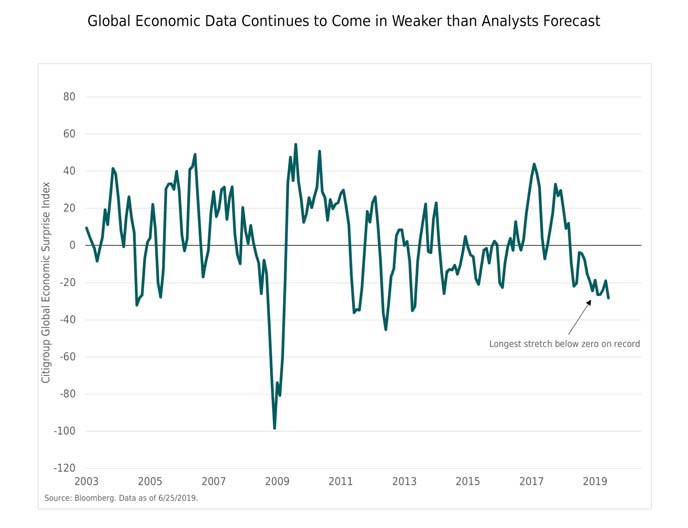 Over the shorter‐term, if the  global economy starts recovering from current depressed levels—with China’s fiscal and monetary stimulus being a key to that outcome—and the United States avoids recession, we would not be surprised to see strong absolute returns from stocks, with possible outperformance from foreign stocks versus U.S. stocks. Further, if the growth differential between the United States and the rest of the world narrows, the U.S. dollar will likely depreciate, providing an additional tailwind to foreign stock returns for dollar‐based investors—particularly in emerging market stocks.

A solid global economy would also be beneficial for our flexible fixed‐income and floating‐rate loan investments relative to core investment‐grade bonds, which have much lower yields and would be hurt by rising interest rates. This is the opposite of what we have witnessed thus far in 2019, as core bonds with duration have led the way as interest rates have fallen significantly.

If the global economy continues to weaken and the United States falls into a recession and bear market, balanced (stock/bond) portfolios have “ballast” in the form of core bonds as well as lower‐risk fixed income and alternative strategies that should hold up much better than stocks on the downside. These lower‐risk, alternative positions have been a drag on our overall returns over the past several years as U.S. stocks have been in a raging bull market. But we’ve seen their benefits during the occasional market corrections‐‐the reduced correlation of equities to our alternative funds means that losses to the alternatives sleeve have been a fraction of that of the broader equities market during recent downturns.

As we experienced this past quarter, uncertainty is a constant presence and volatility can return to markets at the drop of a pin (or a tweet, it seems, these days). Regardless of our tactical diversification efforts, those of us who own stocks need to be prepared to ride through the inevitable down periods. It’s the shorter‐term price we pay to earn their higher expected returns over the longer term.

This has been an unusually long U.S. economic and market cycle. But we firmly believe it is still a cycle, and that our patience and fundamental valuation discipline will be well‐rewarded as it turns again.

As always, we appreciate your continued confidence and trust, and we work hard every day to continue to earn it.
—JMS Team

This material is not intended as an offer or solicitation for the purchase or sale of any financial instrument or investment strategy. Certain material in this work is proprietary to and copyrighted by Litman Gregory Analytics and is used by JMS Capital Group Wealth Services LLC with permission. This material has been prepared for informational purposes only, and is not intended to provide, and should not be relied on for, accounting, legal or tax advice. Any references to future returns are not promises ‐ or even estimates ‐ of actual returns a client portfolio may achieve. Any forecasts contained herein are for illustrative purposes only and are not to be relied upon as advice or interpreted as a recommendation for a specific investment. Past performance is not a guarantee of future results.

With the exception of historical matters, the items discussed are forward‐looking statements that involve risks and uncertainties that could cause actual results to differ materially from projected results. We have based these projections on our current expectations and assumptions about current and future events ‐ as of the time of this writing. While we consider these expectations and assumptions to be reasonable, they are inherently subject to significant business, economic, competitive, regulatory and other risks, contingencies and uncertainties, most of which are difficult to predict and many of which are beyond our control. There can be no assurances that any returns presented will be achieved.