Biogen’s treatment for Alzheimer’s disease was unexpectedly approved last week by the FDA. The ruling was a surprise given that the FDA’s advisory had voted that aducanumab, now known as Aduhelm, had failed to demonstrate evidence of effectiveness. A second shock quickly followed, as Biogen announced its listed price for Aduhelm would be $56,000 per year. Needless to say, this was good news for Biogen stock: 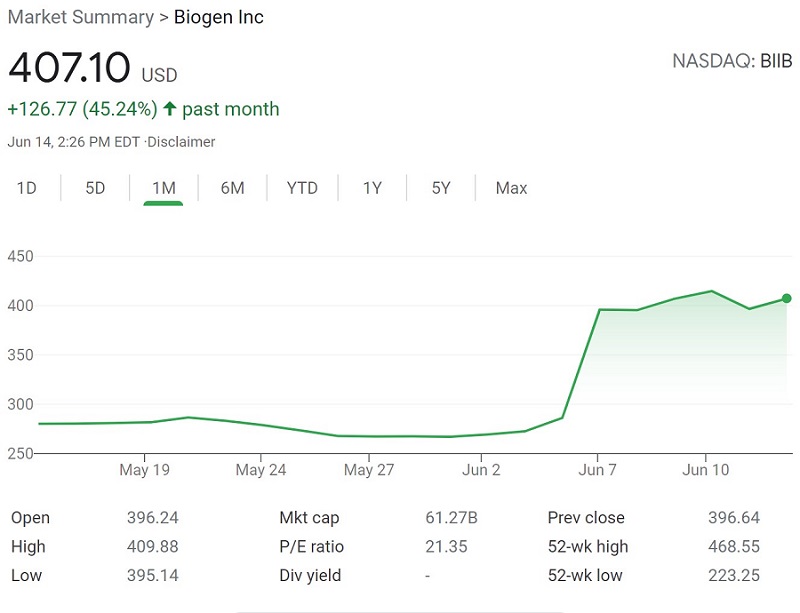 A charitable argument can be made for the FDA approval. No new drug has been approved for Alzheimer’s for almost twenty years, more than 6 millions Americans suffer from Alzheimer’s or another form of dementia, and, as CBNC notes at https://www.cnbc.com/2021/06/12/biogen-alzheimers-drug-and-the-new-battle-over-dementia-treatment-.html, the disease costs as much as $259 billion per year. Aduhelm targets amyloid plaques that are connected with the development of Alzheimer’s. Since Aduhelm has demonstrated an ability to clear out clusters of amyloid plaques, the hope is that cognitive benefits will follow. And even if Aduhelm ends up being ineffective, its approval provides incentive for the testing and development of other Alzheimer’s drugs that may be more effective.

However, Aduhelm’s approval may prove to represent the triumph of hope over experience. Rachel Sachs addresses numerous concerns regarding Aduhelm’s approval at https://www.healthaffairs.org/do/10.1377/hblog20210609.921363/full/. First and foremost, Aduhelm may not work—there’s a lengthy history of failure with respect to Alzheimer’s drugs targeting amyloid plaques.  And Aduhelm’s success, such as it is, was based on a reduction in clinical decline for one high-dose group from a phase 3 trial.  However, there was no benefit for either the low-dose group or the high-dose group from another phrase 3 trial. The FDA’s advisory committee was highly skeptical of aducanumab, voting that the clinical trials did not demonstrate evidence of effectiveness, and after Aduhelm’s ultimate approval, 3 of the advisory committee members resigned in protest. FDA approval was based on the presumption that clearing out amyloid plaques would yield future cognitive benefits; it remains to be seen whether that theory will hold up in practice.

The high list price for Aduhelm may also have enormous implications for Medicare if use of the drug becomes widespread. If even one third of the 6+ million Americans with Alzheimer’s were treated with Aduhelm at its full sticker price, the overall cost of treatment would be a staggering $112 billion. This would be tremendous for Biogen’s bottom line, but considering that Medicare parts B and D spends $37 billion and $90 billion, respectively, on all prescription drugs, Aduhelm could become a large long-term burden on Medicare.

Something will have to give. Medicare or Medicaid could limit approval for Aduhelm reimbursement; Aduhelm could offer rebates that lower its $56,000 annual price; Congress could finally be spurred to pass a prescription drugs bill. For Biogen, most roads forward appear profitable (hence the massive rise in its stock price)—if Aduhelm shows efficacy, it will be strongly positioned in a market with millions of long-term patients. If Aduhelm fails to live up to its promise, we won’t know for some years, and Biogen can still reap profits in the interim. For Biogen, the range of possible outcomes appears to extend from good to better to best; for the US government and taxpayers, it remains to be seen how much money will be spent, and what benefits will accrue, from a drug whose bona fides have yet to be clearly established.