Fed Chair Jerome Powell’s August 26th speech at Jackson Hole made clear the Fed’s intention to bring inflation to heel, even at the cost of significant economic pain. Though the speech was short, at only eight minutes, it was blunt, repeatedly arguing for the necessity of continued forceful action now, lest inflation become more deeply rooted.

Powell described inflation as the Fed’s “overarching focus,” and acknowledged that a “sustained period of below-trend growth” would likely be required, accompanied by a softening of labor markets. He also acknowledged that the Fed is likely to maintain tighter monetary policy for some time.

Powell’s overall view is that the Fed is responsible for price stability, and that a lesson the last high era of inflation, in the 1970s and 1980s, is that inflation expectations must not be allowed to become entrenched. Even though current survey and market measures are showing inflation expectations remain in check, Powell argued that continued high inflation posed a significant risk of destabilizing these expectations, and shifting them higher. Powell’s final argument is that the cost of combating inflation will rise precipitously if high inflation lingers, and his solution is to take strong action now, so that the Fed will not need to take even greater action later. In other words, the Fed acknowledges that higher interest rates, slowed growth, and a weakening labor market will bring pain to many households and businesses, but that the future cost of not acting forcefully now would be even greater.

So, Powell indicated that the Fed is all-in when it comes to fighting inflation, and to expect a cooling economy at least until inflation readings are showing a much more persistent downward direction. If Powell was trying to enhance the Fed’s credibility when it comes to its inflation-fighting mission, it certainly appears that he had some success on that front, with an over 6% drop in the S&P 500 over the past week suggesting that markets heard the message loud and clear: 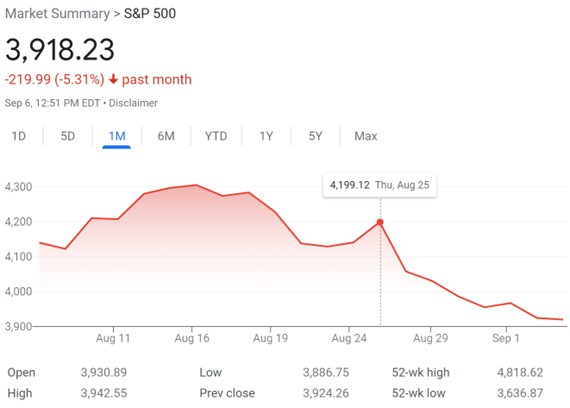