Update on the Inflation Picture

Inflation in February climbed to 7.9%, and core inflation rose to 6.4%; each of these numbers represent the highest mark since 1982. Unfortunately, current events may aggravate and prolong the current bout of inflation.

As Ukraine is a major producer of wheat, the Russian invasion has sent wheat prices higher as well: 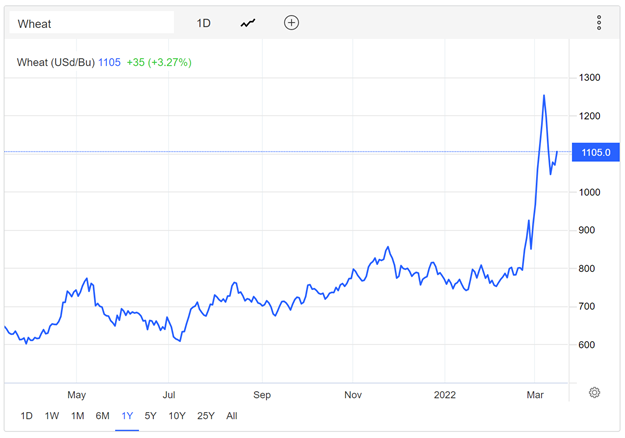 Now, oil prices have fallen sharply this week, to about $100/barrel. It’s possible that this is a correction to oil prices overshooting the mark; however, another potential contributory factor may be a surge in coronavirus cases in China, which has prompted lockdowns and could reduce oil demand. The reduction in oil demand would be good news for inflation; however, it may be accompanied by the toll of increased supply chain woes, as Shenzhen, China’s “Silicon Valley”, is one of the regions currently under lockdown. The degree to which these lockdowns affect inflation depends on whether the current one week lockdowns become extended into several weeks.

All in all, the Fed’s goal of taming inflation without tipping the economy into recession has become much more challenging. A previously saving grace had been that inflation expectations had remained stable over the second half of 2021, indicating that markets generally expected 2021’s high inflation to be transitory. Since the Russian invasion of Ukraine, expectations have changed:

The advance to a 3% 10-year breakeven inflation rate (accompanied by a 3.5% 5-year breakeven inflation rate) would position the economy well above the Fed’s 2% target. As economist Noah Smith observes, the recent run-up in inflation contains little in the way of silver linings. The 2021 inflation surge was likely due to the combination of the economic impact of the coronavirus and subsequent massive fiscal and monetary relief packages; while the stimulus was arguably too large, it came with the enormous benefit or reducing unemployment incredibly quickly from its April 2020 peak of nearly 15%. The Russian invasion of Ukraine, in contrast, has so far shown only that wars can be a lose-lose proposition for everyone, most acutely for the battling countries, but with negative spillover effects across the globe.