The COVID economy has been very unusual. We saw a sharp downturn in GDP and equities and a massive increase in unemployment, but shortly thereafter we witnessed a rapid recovery in all of these areas, but with the somewhat unexpected side effect of high inflation. The Fed is now aggressively hiking interest rates as it hopes to cool the economy and curb inflation, all while seeking to avoid provoking a steep recession and much higher unemployment.

Economists Jason Furman and Wilson Powell III surveyed the economic landscape and found several indicators that are in seeming contradiction with one another. On the plus side, the job market remains surprisingly strong, with unemployment remaining at just 3.6% in June. On the other hand, GDP shrunk in the first quarter of 2022 and may shrink again in the second quarter.

Wage growth has slowed to around 4%-4.5%; given historical productivity patterns this would suggest an underlying inflation rate of about 3% which, while above the Fed’s 2% target, is a far cry from the current 9.1% inflation rate (and 5.9% core inflation rate).

But while both employment numbers and wage growth are not suggestive of high inflation or an imminent recession, GDP and productivity numbers have been worrisome. After a first quarter GDP decline, the Atlanta Fed’s GDPNow estimate shows another GDP fall for Q2 2022: 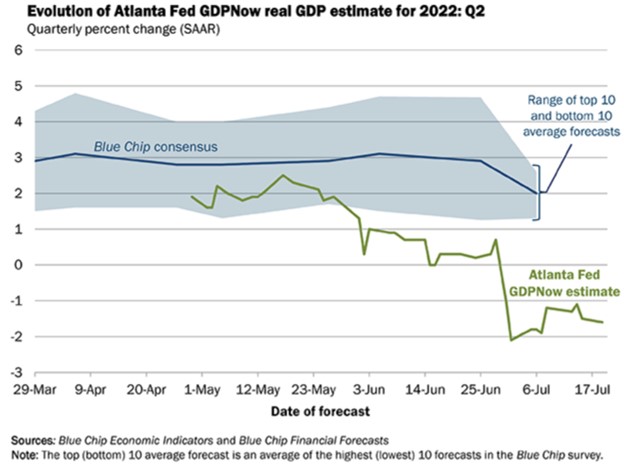 There’s obviously a large gap between the forecaster consensus and the Atlanta Fed estimate. The post-COVID economy appears to have resulted in many unusual numbers, relationships, and discrepancies.

In particular, if GDP is falling, while hours worked are stable, productivity by definition must be falling: 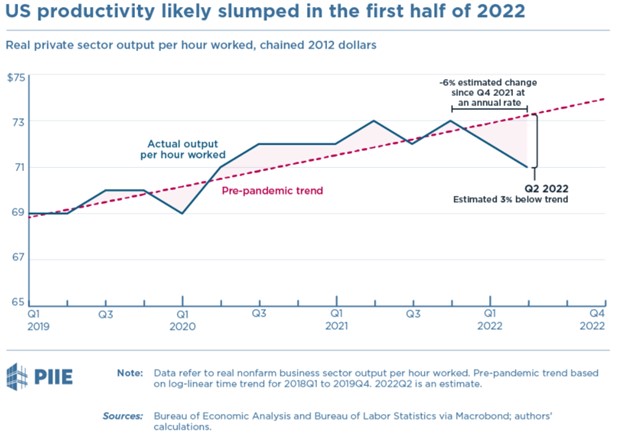 These productivity numbers are poor, to say the least, but it’s difficult to know how concerning this data is. Furman and Powell note that productivity numbers can have multiple sources of error, as they are derived from both hours worked and GDP figures. And GDP, in particular, has recently diverged from another measure of the size of the economy, Gross Domestic Income (GDI).

So we’re left with an economy that’s clear as mud right now, with unusually low GDP relative to employment. Time will tell—either data revisions will close the gap, GDP will rise to catch up with employment, or employment will fall as we fall into a recession.