The 10-year inflation rate, which is a market-derived measure of the expected inflation rate for the next decade, on average, was quite stable pre-pandemic at about 2%. It fell at the onset of the COVID recession, moved above its recent average when inflation started spiking in 2021, but then stabilized at about 2.5% by the end of the year. Unfortunately, Russia’s invasion of Ukraine, which brought a rise in oil prices and major economic sanctions, has darkened the inflation picture further, and the recent drop in oil prices may be countered by the lockdown-causing resurgence of COVID in China. So, inflation expectations for the next decade are now nearing 3%.

Why is this important? As Furman notes, economic modeling of inflation typically has 3 components. One piece is simply an error term, which can reflect unexpected shocks, such as a pandemic or war. The second piece involves the difference between the unemployment rate and the ‘natural’ rate of unemployment—if the economy is running hot, so that the unemployment rate is unusually low, then inflation will tend to run higher. However, this inflation component has historically had only a modest impact—if the natural rate of unemployment is 4%, and unemployment is currently 1%, then the inflation rate would typically be less than 1% higher. The final component of inflation is expected inflation, which is both hugely important and poorly understood.

The economic model that presumes low expected inflation has worked quite well for the United States over the past 40 years; the question today is to what extent the world has changed. Furman writes that short-run fluctuations in consumer inflation expectations have not been very predictive, but today there is a notable gap between short-term and long-term views: 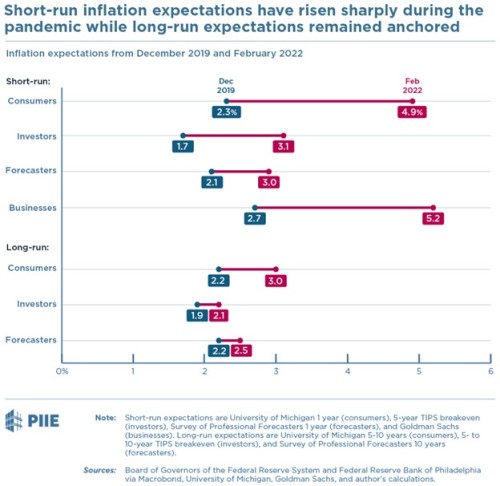