The Fed raised rates 0.25% this month; it is likely the first of several rate hikes this year. In his essay on inflation, economist Jason Furman outlines several possible pathways for the federal funds rate over the course of this year.

Furman notes that for an economy with high inflation and a low unemployment rate, rates are currently at a very low baseline near zero—in fact, a monetary policy rate rule based only on current conditions would likely have a much higher federal funds rate, of perhaps 7% or even more.

Understandably, Fed chair Jerome Powell may not want to shock the economy with a rapid 7% rate rise, so Furman outlines 3 possible methods by which the Fed could raise rates. The first uses the Taylor rule, which would be aggressive because inflation is so high, and unemployment so low, relative to historical norms. The second uses a modified Taylor rule that’s more dovish, giving more weight to unemployment concerns and assumes natural rates of unemployment and interest are lower than historical norms. The last method is the same as the second, except it requires a more gradual rate hike pathway.

Furman graphs the results of his three models: 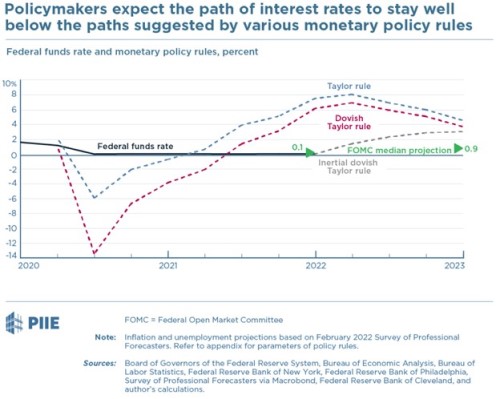 What’s the point of all this? Look at the Fed pathway (as of December—Furman’s paper was written prior to the March Fed meeting). For the first part of this year the Fed was still projecting policy more dovish than the most dovish of policy options. The Fed was continuing to look well behind the curve in terms of doing what it takes to fight inflation.

At the March FOMC meeting, the Fed updated its outlook considerably, reflecting continuing high inflation in the first months of 2022. The current dot plot shows the median FOMC member expecting 6 more rate hikes in 2022 and 3-4 more in 2023:

Furman’s policy recommendations emphasize flexibility—we are in unprecedented economic times, and it is unclear how inflation, supply chains, wars, sanctions, etc. will unfold and how economies will react. His argument is for the Fed to signal that it will keep raising rates as long as inflation is high and unemployment isn’t worsening. Jerome Powell seems to be of like mind, stating that rate hikes would continue until inflation is under control, and expressing a willingness to increase rates more rapidly and to levels above the neutral rate if need be.

It's not certain, though, how far the Fed will be willing to bring inflation down. 8% inflation is too high, but Furman believes that if the Fed can stabilize inflation at 3%, it may choose to not risk a recession by trying to achieve a 2% target. Indeed, 3% even has certain advantages, as it gives the Fed more room to cut nominal interest rates to fight future recessions. Given these circumstances, and Furman’s belief that improved supply chains and low inflation expectations are likely to have a lesser impact on inflation than increased unemployment, we would not be surprised to see the Fed in the future settle for a “new normal” rate of inflation a bit higher than its past 2% target.