The Fed meets again this week, when it is expected to continue its rate hike regime in an effort to combat inflation. Market hopes of a more dovish lean were snuffed out by a poor consumer price index report that came out last Tuesday. Gasoline prices may be falling, but unfortunately core inflation, which excludes more volatile food and energy prices, rose 0.6% from July to August and 6.3% year over year. Markets were certainly aware of the implications of these core inflation numbers that are closely watched by the Fed, as the S&P 500 fell over 4% by Tuesday’s end.

So where do we stand? Economist Noah Smith has an excellent summary of the state of inflation. The Fed’s inflation target is 2%, but core inflation is over 6%. Although previous rate hikes have yet to reverse inflation, they may at least have prevented inflation from spiraling out of control:

The federal funds rate is still under 3%, so although the Fed’s June projections had this rate peaking at about 4%, the Fed certainly has the capacity to increase rates far beyond that mark should it deem such an action necessary. Fed Chair Jerome Powell’s August 26th speech at Jackson Hole made clear the Fed’s intention to tame inflation, even with a significant cost to GDP and labor markets.

Unfortunately, median inflation, which ignores items with the highest price swings and focuses on the middle case, has also risen sharply, and stood at 9.2% in August. So inflation appears broad-based, and not stemming primarily from energy shocks, supply chain issues, car prices, or other particular goods or services.

Markets are anticipating a 75bp rate hike, though 100bp is also in the realm of possibility. The Fed looks determined to ensure its credibility as inflation-fighters, and Powell’s Jackson Hole remarks seem to indicate that a mild recession would be an acceptable cost for sending inflation back towards its 2% target.

The challenge, of course, is to curb inflation while limiting broader economic damage. We don’t know how successfully the Fed will be able to thread that needle, but we do know that many other countries are also facing an inflationary environment. As Maurice Obstfeld notes, central banks around the world have been raising interest rates: 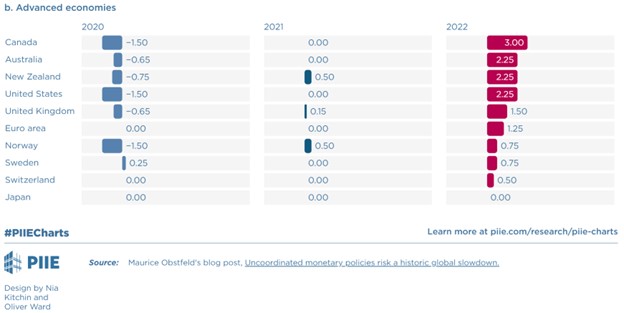 Obstfeld’s concern is that the effect of tight monetary policy in one country would be amplified if numerous countries were raising rates simultaneously, as is currently the case. Inflation is a global problem that central banks are fighting in many countries. The balancing act is reducing inflation while limiting the breadth and severity of any induced recession; this challenge is global as well as national in scope.